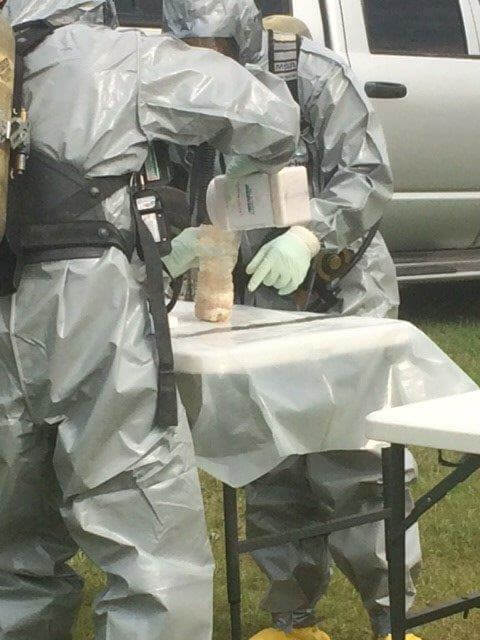 danger to the parties who respond to make arrests, process chemicals, and clean so an area is safe to inhabit again.
No two meth labs are alike. According to the U.S.Environmental Protection Agency, they range from minimal, makeshift operations to highly sophisticated labs. They can be set up almost anywhere — in homes, hotel rooms, cars and trailers, campgrounds, restaurants, or office buildings. Also, there are many different ways to make meth, so the chemicals, by-products, and hazards differ with each police interaction.
Jake Kelton has spent more than 20 years responding to more than 1,000 meth labs across the country. He has seen law enforcement and emergency service personnel receive both immediate and long-term injuries from exposure to these harmful and deadly chemicals. Because of safety concerns for their personnel, most municipalities hire third-party hazardous-waste companies to assess and mitigate risk.
In 2005, Jake founded MERIT Training Programs, a Pennsylvania-based tactical training program to arm law enforcement with the skills to discover and dismantle meth labs. Police officers train in realistic meth lab environments to investigate potential labs, identify items and containers commonly used to make meth, and raid labs and equipment. They then process labs, render everything safe, discard hazardous chemicals, photograph, seize, and prosecute.
Amphomag® Universal Spill Neutralizer, a universal spill neutralizer, is a key product used in the training program because it neutralizes chemicals on the spot for safe removal. Amphomag® is applied as a powder, and as it absorbs liquid, it turns bright red if the liquid is an acid or bright blue if it is a base. As it neutralizes, the color gradually changes to yellow or green. The remaining material can be thrown away in a controlled trash receptacle at a police agency.
“With proper training, law enforcement agencies can safely dispose of 90 percent or more of all meth lab chemicals and items, at a fraction of the cost,” says Jake. “We test gas generators and one-pot meth labs on site with pH paper, determine what acid it contains, add Amphomag® to the bottle, and stir, neutralize, and throw away.”
Jake recommends all specialized personnel involved in meth lab investigation have Amphomag® on hand to deactivate gas generators, cooking flasks, and any mixed solvents found in a clandestine lab. Without the need for third-party cleanup crews, law enforcement agencies nationwide can reduce remediation time, liability, and potentially save tens of thousands of dollars annually.
“Amphomag® revolutionizes the way meth labs are currently being processed,” Jake said.  “Law enforcement no longer has to have special operations teams to process labs because any police officer trained through me can do it on the scene immediately.”

How much would my organization save by using Amphomag® to contain and neutralize methamphetamine seizures? Calculate my savings >>

Amphomag® is a registered trademark owned by Premier Magnesia, LLC.